* Correction made – it was brought to my attention that although permitted for 9,000 this pig farm will actually be home to up to 5,400 sows. They will farrow (have piglets) throughout the year.

There are certain things that happen in my state, a state that I love dearly, that just makes me shake my head in awe and wonder. And recent events definitely qualify for shaking my head.

A family farm from Minnesota is moving forward with plans on starting a pig farm in North Dakota. They’ve located a site that follows all the state rules, guidelines, setbacks, etc. They’ve worked hard on dotting i’s and crossing t’s, and are in the final stages of getting set up. Oh, and did I mention that they run their farm like a business…like all of us that farm do, or at least should.

Except now we have people standing up in opposition, insisting that somehow this farm will destroy the dreams that they’ve had for peaceful living in a rural area. It’s truly a case of “not in my backyard.” Apparently many people forget that agriculture is still the backbone of our state. So let’s take a look at the numbers, shall we?

This pig farm will house up to 5,400 sows – with the average potential to almost double the number of pigs that our state raises to feed people. Remember that? Pigs are raised for food. Like bacon.

Local food is all the rage now. Many of the opponents to the pig farm are big proponents for local food. Right now the state of North Dakota has about 150,000 pigs that are used for food each year. The average pig brings 150 pounds of meat to the table…literally. According to statistics, the average person eats about 46 pounds of pork per year. This means that a pig generally provides a year’s worth of food for three people.

There are 739,000 people in the state of North Dakota. That means we would roughly need 34 million pounds of pork. We only produce 22 million pounds right now. So who doesn’t get bacon? Or pork chops? Or pork roast?

Oh, that’s right – local food is only important when it can be raised by “mom and pop” farms. “Family farms” quit being family farms once you consider it a business. And let me remind you, that this farm is a family farm. That term does not change regardless of size. And size does not determine the “friendliness” of a farm to its neighbors. They are good neighbors. Big does not mean bad.

Opponents claim that this is a direct result of changes made to our state’s anti-corporate farming law that relaxed restrictions in hog and dairy operations. But guess what? Rolling Family Farms ends with LLP, not LLC. That’s right, it’s a partnership, not a corporation. The changes to our law make no difference whatsoever.

A boy and his pigs. But not sustainable large-scale.

My farm raises pigs. This year we’re increasing our farm size to eight. I have four boys in 4-H and they will show pigs at the fair. But I can tell you that our business model for the pig-side of things is not sustainable.

I love bacon. I love agriculture. I love this state I call home. But we need to wake up and read the writing on the wall. We cannot continue to think that the old-fashioned way of doing things will sustain us long-term. We use new technologies in medicine, how can we not embrace the same changes for our dinner plate?

I support agriculture. I support food. I support choices. I don’t understand those that stand in the way.

Trust me, I have more to say…stay tuned.

Today’s Wordless Wednesday post is brought to you by the newest members of Team Wagner: our 4-H pigs!

Here’s a sneak peak, although I’m sure they’ll have their own posts from time to time: 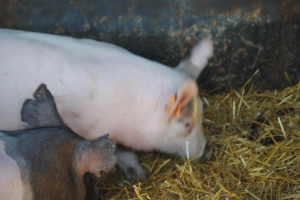 EJ picked a pink pig with a black nose. That was his version of “perfect.” 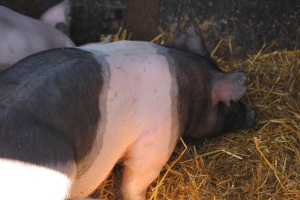 Scooter picked this guy out. Not perfect, but built the right way, just like him!

EJ wasn’t sure about the smell of pigs, but he thought it was fun to give them treats! 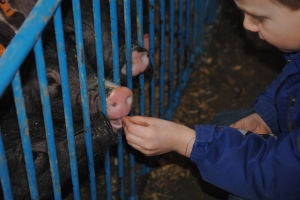 EJ really loved feeding them marshmallows! I have a feeling we’re going to have some spoiled porkers! 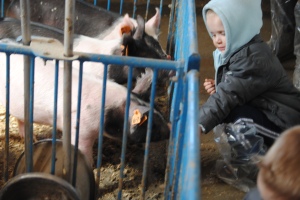 George loved the pigs! ALL of them! He was mad that he didn’t get a 4-H pig, but I figured three was a good start.

Two days left until 4-H judging. We’re working on finishing up final touches, making sure the boys remember the steps to take their projects from beginning to end (the only downfall to starting projects early, making sure they remember them!). It’s been a crazy few weeks, but oh, so worth it!

Big Bro wasn’t happy with some of his photos that he was going to show at the fair, so he took some new ones yesterday. I really like his eye for the unusual, yet it’s the stuff that’s around us all the time. They may not judge as well as some dynamic photos, but I want him to explore what’s important to him…and that’s all that matters:

Big Bro and his cousins have turned an old grain bin into a “museum,” where they put things that they’ve collected around the farm. 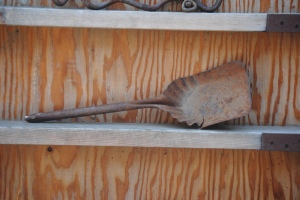 I’m sure Grandma and Grandpa remember these.

Sometimes a boys best friend isn’t his dog…but the cat that thinks he’s a dog.

EJ posing with their kitty. I don’t think Big Bro realizes how great he framed this photo.

It’s almost over, the craziness that is the county fair. I never understood how busy it could be, but now my boys are in 4-H…and I’m a fair board member. (Well, or at least I work on fair publicity, and some logistics.)

So, what are the boys up to? Well, we’ve been working on projects for months, so that it was not a crazy mad-dash to the end…and it kind of worked, but kind of didn’t. I don’t think it matters what you try to prepare for, sometimes you just end up flying by the seat of your pants.

For example, the Big Bro entered some veggies…and yet, with the weather conditions, we don’t have much to show for it, even with watering. But a few things did work out, like our dinosaur planters.

Big Bro loved getting these ready for the fair!

And a pillow made out of bandanas: 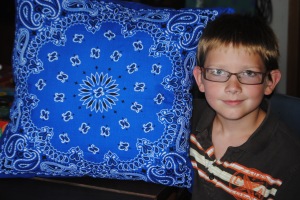 Big Bro told me that sewing wasn’t his thing…and then after the project he said, “Well, you didn’t tell me it was fun!” 😉 I can’t tell him ALL the secrets!

I just need to make it through this week…make…it…through.

Is it Sunday yet?

Pinterest. It’s my new best friend. And as a 4-H mom, the ideas there are endless!

The county fair is a few months away, but we’re gearing up and getting projects out of the way early…I know, crazy idea, right???

So here’s our first completed project. And as long as the dog leaves it alone, we’ll be good to go!

1) We found these two dinosaur toys at the 4-H rummage sale on Saturday…cool coincidence! They are pretty well the perfect size, but it wouldn’t hurt if we could find a few bigger ones as well.

Cutting through the plastic was a little tough. But we poked a hole to start, then used a snips to work around.

2) Cut a hole in the top of the dinosaur. Big enough to plant in, but not so big that you can’t keep dirt inside.

Make sure to add drain holes in the underbelly, and down the tail.

3) Be sure to add drain holes in the bottom!

4) Fill the tail with dirt. Get it damp, so that the dirt really fills it. You don’t want any air pockets killing off your new plants!

5) Pick plant of your choice (but make sure it will fit) and plant it in the new pot. Water well. (We went to our local garden center and looked around, asking the horticulturalist for advice…he did suggest moss roses, since they are smaller to begin with and will grow just about anywhere!)

Cool planters that even little boys will love!

I love it! And can’t wait to see what we come up with next!

Sunday was the annual 4H carnival at a near-by town. Scooter was tickled pink to be a part of it, and eventually Big Bro warmed up to the idea. Check out some of the great pics!

Why yes, yes it does!

Great cake for the cake walk!

Big Bro kept playing the cake walk game until this cake was gone. He was disappointed that it didn't come home with us.

Scooter wanted to help out with the face painting, but he's only 8 and I didn't think he would do a very good job. Mom was wrong, and is proud to admit it. He made this flame, with oranges and yellows, and did an amazing job. He was so incredibly focused. Thank you, 4H!

I was reflecting on the past week, and something came to mind that I wanted to put down in my blog, so that someday Big Bro can look back and remember the impact that one little statement had on me.

As we were preparing for the Buy’N Show at the county fair (remember, the Reserve Champion ribbon that he didn’t want to compete for?), Big Bro had to fill out a form for the emcee to use to make a narrative for the Style Show part of the competition.

His response caught me a bit off guard.

He replied, “I have everything I want right here…why would I need to go anywhere?”

Yeah, I had to wipe tears from my eyes, too.

The best gift that my son could give me...reminding me that everything I could ever want is still right here.

The Wonderful World of Wagners