Well, we’ve spent the last few days cleaning up, tearing down and getting ready for life to resume some normalcy.

In the excitement of it all, I forgot to give a wrap up on our fair happenings! This was our first year as a 4-H family and the boys enjoyed sharing their projects and watching others, as well.

Since Scooter is only 7, he’s a Cloverbud, which means that he can show projects, but he only gets participation ribbons. There’s no competition for him. It was GREAT for him to receive nothing but praise and suggestions for future years. I only wish I would have had the foresight to do the same thing for Big Bro…but he still did a SUPERB job! 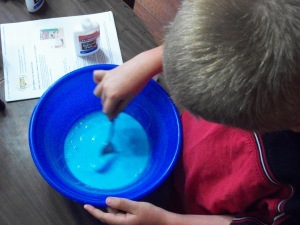 Gak, Gluk, slimy stuff...whatever you want to call it, Scooter made it.

Big Bro took nine projects to the fair…including: two fishing lures, one pop-can lamp, three photo projects, two dog projects and one bug display. He received six blue ribbons and three reds! I was so proud of him!!! 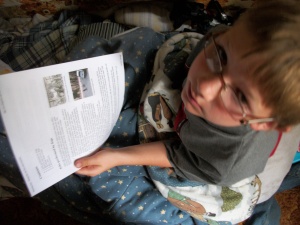 Big Bro was researching all the different jobs that "working" dogs do...he thought it was so cool!

On top of that, Big Bro tried the consumer choices competition and received a third-place ribbon.

Then, on Sunday, Big Bro and Scooter had both volunteered to participate in the Style Show. Scooter showed off his tee-ball uniform in the Have ‘n Show (just a show with clothes you already have…no judging) and Big Bro showed a school outfit he picked out in the Buy ‘n Show.

Big Bro was interviewed by two judges on the price of the outfit, uses, how to care for it, whether it was a smart purchase, etc. He was nervous about participating because he was the only boy, but once he warmed up, he did great. When it came time for the judging and the ribbons, we were both surprised when he was named the Reserve Champion! Talk about a happy boy!!!

So, in all, the fair was so much fun and such a great experience! The boys are already talking about next year…and I couldn’t be happier.

I did see one amazing booth at the fair that I really wish more people would have been able to experience: 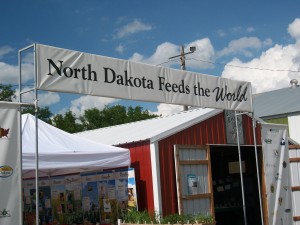 This display on North Dakota ROCKED!!!

This “North Dakota Feeds the World” display was absolutely amazing. It had actual crops growing, commodities available to view, information, great pictures, etc., etc. The only problem was that it was only set up for Thursday afternoon/evening. And that means that not a lot of non-ag people were able to view it. I’m hoping that we can get it back in the area soon…and I’m looking into it. If you see it in your area, be sure to check it out. You won’t regret it!!!