After I came home from church today, Boss Man called and told me he had to be out of the yard for awhile. In Boss Man terms, that can mean anything from 30 minutes until sometime later in the week. What he was getting at was that I was going to be responsible for keeping an eye on our herd, which happens to be smack dab in the middle of having calves.

No biggie. I’ve watched the cows before. I can handle it. And then he gave me a little reminder, “Keep an eye on 176. She’s off by herself to the east.” In cattleman terms, a heifer off on her own is a sign that she’s probably getting ready to have her first calf.

So I watched our cow cameras diligently. And after an hour or two, decided I should walk down and check things out in person. (You see, much like most of technology, the cameras only work in the right circumstances…cows facing the right direction, right lighting, right angle, etc.)

The cow I thought I was watching wasn’t the cow that needed watching. The cow on the west end of the straw, in the midst of all the other cows, was actually the one calving. And by calving, I mean the birth was imminent and I had no time to get her to the barn.

So I stood and watched the miracle of birth, and called Boss Man to let him know that I hadn’t exactly succeeded in my duties. (Ideally, all calves would be born in the warmth of the barn, not out in the cold…but you must make due with the cards you’re dealt. I can’t turn back time – yet.) 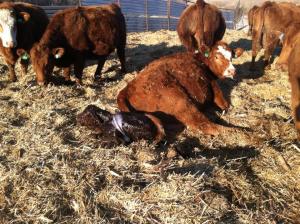 This heifer (which means this was her first calf) ended up having her calf outside. Not ideal with the temps below freezing.

This meant I needed to get the new calf to the barn – and the quicker the better.

The trick is that sometimes cows don’t want you to take their calves to the barn. And since this was her first calf, I wasn’t sure how she was going to take the news I was about to break to her. 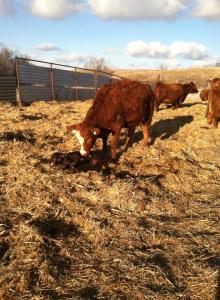 She’s a good mama, which means that she’s protective of her calf. Not always an easy task to get them to the barn.

To begin with, she wasn’t too sure what this thing was on the ground next to her. But she figured it out pretty quickly. And then she was pretty certain that I wasn’t supposed to be there. And she let me know. (A cow can easily injure, or even kill, someone not paying attention and respecting the power of the animal.)

But when it’s only a few degrees outside, you don’t have luxury of time before the calf is at risk for frozen ears or worse.

I finally got the calf in the sled. (Thank goodness I’ve dropped a few pounds.) And to the barn. Usually the cow would follow, but this new mama was a bit confused about all the action. So I brought her down once the calf was given a ride to the barn. 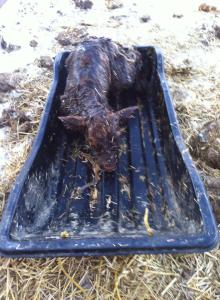 Thank goodness this little one cooperated…mostly. Imagine dragging a 100-pound child in a sled while they’re trying to stand up. It’s a workout, to say the least. 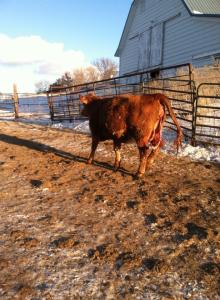 My next job was to bring the heifer down to the barn. Thankfully, she was pretty easy to bring in.

And the reunion was a sweet one. 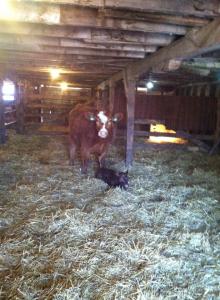 Success. Both in the barn, no injuries, no cold calf, and everyone happy.

Last week I was in DC in a suit, I’ll be dressed up tomorrow for work – but today was one of my favorite outfits of all. 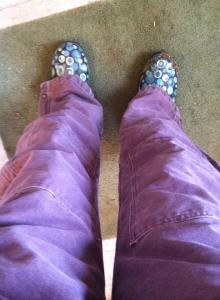 Purple coveralls and blue polka-dot Bogs. I don’t have to worry about one of my boys stealing my cold-weather gear.

7 thoughts on “When a calf is born in cold weather”

Leave a Reply to Bob in VA Cancel reply