I hunt. And by that, I mean that I actually shoot wild animals and use them for food…and occasionally decorations. (It’s the woman in me.)

This weekend was the opening weekend for deer season where I live. I went out, by myself, and walked, waited, and tried my best to think like a deer. I apparently suck at that, but my luck tends to be rather high. As I was getting ready to head home, my sister and her friend told me that there was a nice buck in our barnyard. (How many times do I tell people that we need to start in our own backyards???) 😉

After quite the little escapade, I had my tag filled, meaning my season was done for the year. Yay!

I would consider it a successful deer hunt! A nice 5X5 buck whose antlers will hang on my wall and whose meat will fill my freezer.

So why do I hunt? Well, it’s not just the thrill of the chase (although, I will admit that I’m kind of fond of that part.), and it’s not just because venison is so very, very nummy. No, it’s not just that at all. It’s because it’s the humane thing to do.

Did I fall and hit my head?

No, in fact, I have most of my faculties pretty well straightened out. And after what I saw a few years ago, I will support every season that is opened for wild animals. (I guess I should put in a “within reason” clause in here, just because I don’t want to be called out on this sometime in the future.) That doesn’t mean I will hunt in every season, but I will support the right to hunt.

It wasn’t so very long ago that we had a deer problem in our yard. In. Our. Yard. Having to bury approximately 200 deer that year was hard, watching all that meat go to waste was hard, knowing that it could have been prevented was hard. 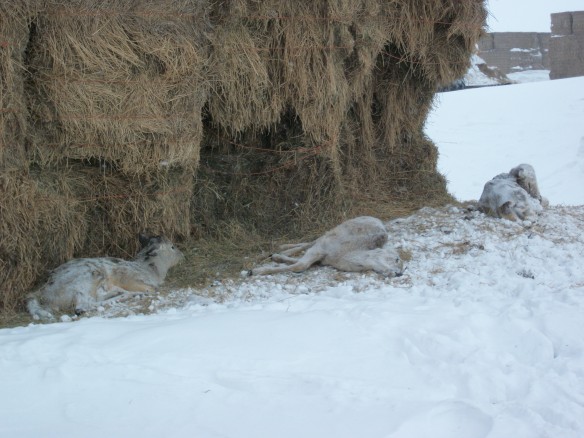 We found deer, frozen in our feed.

This is a pile of deer carcasses that were collected from our hay yard a few years ago. Approximately 60-80 deer in this group. We had hundreds in our yard, and many died that winter. To make a long story short, our hay was too rich for their system and we could get no help in dispersing them from our land.

So from now on, I will actively do my part to ensure that the deer population is controlled, and that we are proactive in our steps to ensure a healthy habitat. The key word being “healthy.”

And next year, I will teach my son the skills required to hunt. Typical? Maybe not. But I cannot wait for the chance to show him what my dad and grandpa taught me.