We had a visitor at our farm this week. He didn’t eat much, didn’t take up much room, but wanted to learn about what we do. His name is Flat Aggie, and he’s a project that was started by a teacher in California.

Many people are aware of Flat Stanley, the popular children’s book that follows the adventures of a paper man. This project is very similar, except the teacher sends Flat Aggie to farms across the country, hoping to learn through Flat Aggie’s travels all about what happens on the farm.

So what did Flat Aggie learn about on our farm? He helped with tagging our heifers with their cow tags. (To learn more about what the cow tags mean, such as their color, read more here.) For our heifers, that’s kind of like being adopted. When we switch out their calf tag with a cow tag, we’re including them in our herd. 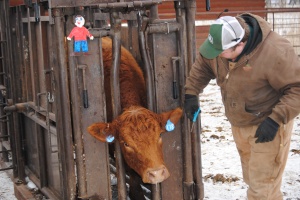 While we were tagging the heifers, Flat Aggie also helped us trim the hair growing in the cattle’s ears. This makes it easier to see the tag numbers when we are working with the cattle. It’s important that we’re able to know which cow we’re dealing with from a distance, so that we can keep track of health, calving progress, etc.

This heifer (meaning she’s going to have her first calf soon) is trading her yellow calf tag in for a blue cow tag!

The last thing Flat Aggie helped us with was giving pre-calving vaccinations. For our cattle, this is very important for the health of the unborn calf. Think of it as a pregnant woman getting a flu shot. The risk of being ill while pregnant, or immediately after the baby is born is greater than the minimal risk of the vaccination. In cattle, even more so. 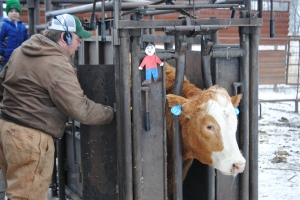 Before she goes back to eating her breakfast, this heifer gets a shot that will help protect her unborn calf from illness.

The best part of having Flat Aggie visit our farm? Being able to see things from another perspective. Having to figure out how to explain what we do so that a student could understand was a real eye-opening experience. And it’s great to connect to others across the country that are interested in what we do, but really have no way of finding out, other than through activities like this.

Did it take a little time? Of course. Was it worth it? Without a doubt.

Flat Aggie will be moving on to his next farm, learning his next lesson, sharing his next story. But you don’t need to have a piece of paper to encourage you to share your story. You can do it all on your own.

Trust me, people are wanting to hear what you have to say…you just have to take the step to share it.