Well, we finally did it. We managed to have a real family day. Spent doing nothing but family stuff. Well, except that morning. Mark had to rotate the tires on the suburban, but that was it. We hit the road.

We spent a wonderful day at our niece and nephew’s birthday party. And we had a blast!

There was a pinata…

George decided he wanted a turn!

And then there was an attempt at getting a family picture…

And then there was playing…lots and lots of playing!

The water table was a big, big hit!

EJ had to concentrate hard on his plans. 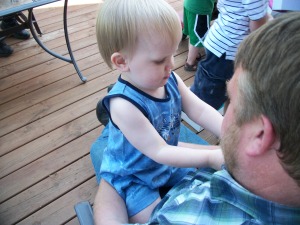 And then, as we were getting ready to leave, the idea came up that we take a drive to see the historic Garrison Dam (it’s releasing water for the first time since it was built!). It was a little bit of a jaunt, but it added to our special day…and we had special guests with us too! (Uncle Bryan and his little angel joined us for the drive…although mostly just napping for the little ones!)

It was an amazing sight to see!

And then, when we hit Bismarck on our way home, this lovely little storm added some excitement to our journey…

I kept having flashbacks from the movie, "Independence Day."

Yeah, it was definitely kinda creepy!

On our way home, we stopped and visited a college-friend of Mark’s and had a great visit…plus I was able to pick up some 4-H pointers! Score for me!!! The kids played well, even with it being on the late side. Although I had to make sure that EJ didn’t take home any extra tractors! It was great to spend a normal day, much like many other families.

On the farm, that doesn’t happen nearly often enough!