Just a few minutes ago, the mailman brought a package to the door that wouldn’t fit in the mailbox. I had an idea about what it was, so I asked EJ if he wanted to open it…

and I have the happiest boy on this side of the county. 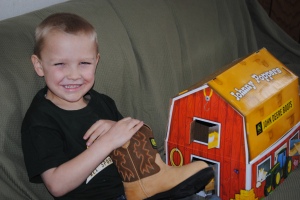 EJ opened new boots in today's mail! And they're "tractor boots." How cool is that?

Yes, I splurged a little, but not too much. They were on sale through Zulilly (I l-o-v-e that site, by the way) and they are John Deere boots. I knew he would love them, but I didn’t know that they come with a little surprise… 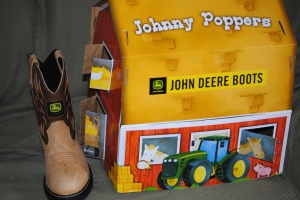 Box for boots, and a BARN!

The box that the boots come in turns into a barn! How cool is that! I had to fold some pieces together, but it’s all one piece, and I have one little boy in heaven.

Checking to make sure there's enough room for his tractors.

Now, normally I would buy his boots from a thrift store, or off Craigslist, or something like that. It’s not that we can’t afford to buy brand new boots, but really, let’s be sensible. If their main purpose is going to be walking through mud, riding in tractors and traipsing through a barn full of….manure…would it make sense to buy them new?

I’m pretty sure the cows don’t care. And Iknow that EJ doesn’t. But these were a special surprise, and worth every dime, just to hear the squeals of joy.

The box is even printed on the inside. "Just like ours, Mom!"

In a world where demands and “I deserve”s are heard more than thank-you’s, hearing my not-so-little boy exclaim with appreciation and tell me that he’s so thankful for his new boots…well, that’s worth it’s weight in cowboy boots.

And, no…they won’t be allowed in the barn yet, but I imagine they’ll make their way there soon. 😉