It was a weekend to remember…and an amazing Saturday at that!

Boss Man and I went to the Inaugural Stockmen’s Foundation Ball, and even though the day started out rough, Saturday ended spectacularly!

But let me start with the pre-story story. I realized that Boss Man didn’t have the right “tools” in his closet for a formal event. Although I know that he could get by with the different shirts we had at home, I was out and about and thought I would get him one that…well, to be truthful, I thought I would get him one that fit. As in buttoned at the top.

I had never been to a Men’s Warehouse, so I decided to stop and see what they had. I had an “interesting” experience to say the least. I knew when I walked in that the gentleman helping me wasn’t going to see things my way. But I gave him a chance. He asked if he could help me, and I told him that I was looking for a shirt that would work well with a white and black dress for a formal event. He asked the size, and I gave him my best guesstimate. (Have you ever tried to get a man to leave the farm early enough to be “fitted” for a shirt? He keeps giving me the measurements from our wedding…and trust me, those don’t work so well any more.)

The man handed me a plain white packaged dress shirt, with off-white-ish buttons. I asked if he happened to have anything more “western.” He stared at me as if I had grown a second head. He asked what I meant, and I told him that my husband happened to prefer his dress shirts to snap up the front, instead of button. I must have made a major faux pas there, because he kind of sniffled, and proceeded to tell me that, “buttons are what makes a shirt formal. Not snaps.”

Hmmm…I don’t know if I agree with that. I mean, I’ve seen George Strait looking mighty fine at plenty of red carpet events. And I do believe that some of those shirts had snaps on them. Although, I must confess that I sometimes get distracted looking at George Strait and don’t always pay attention to his shirt closures. Same goes for Kenny Chesney, Trace Adkins, Jason Aldean, Tim McGraw…ummm…what was it I was talking about again? Sorry, got a bit distracted there.

Anyway, my point is that western wear can look just as formal and nice as a regular suit. So I put the gentleman’s suggested starched shirt back and headed to RCC, where I should have just started. I found a great western shirt that looked spectacular, including the pearl snaps on the front.

We went to our ball, we danced, we visited with friends (old and new) and we had an amazing time. And didn’t look too bad either. 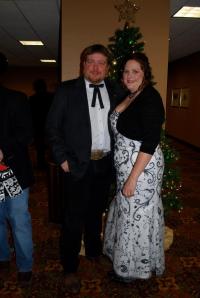 Cleaned up and off the farm...hardly recognize us!

On a sad note: last week Monday I asked for prayers for my mom’s best friend, Darlene, who was in desperate need of a liver transplant. I ask that you now keep Darlene’s family in your prayers, as she passed on last evening. The heavens have indeed gained a beautiful angel…and one that my grandma certainly greeted with open arms!

8 thoughts on “Dressed to the nines”