Normally I don’t discuss a lot of political stuff and government-type news. We get enough of that every day, I feel. But this latest proposal hits close to home…in fact, it hits our family directly, and possibly yours, too.

The US Department of Labor has submitted proposed new “rules” regarding children under the age of 18 working agricultural and non-agricultural jobs. Some of them make sense, and seem almost silly that we need to have a law for it. (Who truly believes that a 16-year-old should be allowed to work with dynamite?) Yet others would severely affect our farm…and many farms across the country.

The proposed laws would eliminate children from the farm-labor work force, or at least not without proper training and certification. Sounds great, right? I’m all for more safety on the farm. But upon closer inspection, these rules do very little to ensure safety and do a lot to infringe upon farm families.

For instance, a child would no longer be able to pick up sticks and branches around the yard while Mom or Dad is using a chainsaw, or some other mechanical method to bring down trees and shrubs. (Actually, the child couldn’t be using ANY power tool…that would include battery-operated drills, screwdrivers, etc.) The only exemption would be if Mom and Dad own the farm wholly on their own (not in cooperation with someone else, including family). I know that not everyone is aware of this, but many farms incorporate and set up business structures, so that success can be shared throughout the family equally, same as expenses.

Is this the closest he'll get?

Another portion of the proposed rules states that a child under the age of 16 could not work “on a farm in a yard, pen or stall occupied by a bull, boar, stud horse maintained for breeding purposes, sow with suckling pigs, or cow with newborn calf (with umbilical cord present).”

Trust me, as a mother of four young children, our house already has laws and rules in place regarding what our kids can and cannot do, including not being anywhere near the bulls, staying out of the yard when the cows are calving, etc. But now would we be open to fines if our children were to go into the barn to feed the cats while cows were in the barn with their calves? (And just to clarify, there are pens that keep each cow/calf separate and out of the main part of the barn.)

EJ, keeping me company while waiting for the silage cutter to be fixed.

And yet one more silly section would make it against the rules for anyone under the age of 18 to even ride IN a tractor with someone who is working, or in the process of working.

How in the world are we supposed to educate and involve the next generation? What about those that don’t have farm backgrounds, but are interested in becoming involved in agriculture? How do we tell the next generation that we don’t want their help, until they’re adults? One thing I have learned quickly, raising four boys, is that the more involved I get them earlier on, the more they enjoy and want to learn about the farm. If you leave them out, where will farming be in 40-50 years?

Waiting his turn...his dad is in the tractor, his grandpa is in the combine. Is his future in jeopardy?

The answer is not clear. Would children be able to show their animals if their parents weren’t direct owners of their operations? Would they be able to sell their livestock and receive the money for college funds, as so many kids in 4-H do? 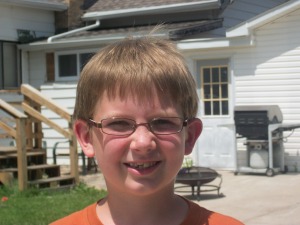 My oldest two have found excitement and education in 4-H. Is that in jeopardy as well?

I understand the need to update regulations…the present set hasn’t been updated since 1970. Yet, can common sense come into play, please? They rattle off statistics of children that are injured or killed in farm accidents, but if you look closely, some of those statistics are misleading.

One such example they give is a 17-year-old who was illegally employed and was a fatality in an accident. The way I look at it, if the child was already illegally employed, then changing the laws would do nothing to ensure that child’s safety. Laws only protect those that follow them.

Yes, I’m all for protecting our children, especially those that live on or near farms, but we cannot protect our children while making their home off-limits and telling them that they’re not wanted, or needed, on the farm. That’s a disservice to all.

Comments on the proposed changes are being accepted through TODAY, please make your voice heard. Visit www.regulations.gov, it’s RIN 1245-AA06.

Today is Thankful Thursday. Today I am thankful that my children can be raised on our farm, in a safe and loving home. I’m thankful that I, as a parent, can teach and instill in my children the love and respect for the farm that it deserves. But it’s MY job to be a parent…not my government’s.

6 thoughts on “Thankful Thursday – Children on the Farm”