It’s been a crazy few days…in ways that I can’t even begin to explain. We couldn’t get to church this morning because Boss Man returned from his uncle’s funeral at 2 this morning, and I stayed up to watch cows so he could sleep. I took a few moments this morning for myself and did a little thinking, I guess some would call it reflecting, maybe others would call it meditating.

I’m reading a book called “99 Ways to Raise Spiritually Healthy Children,” by Kathleen Long Bostrom. It’s not my usual reading fare…but any time I see something that I think will help me be a better parent, I’m game to read it.

The first two pages went straight to my heart…and I know I’ll be hooked for the other 98 ways (but I’ll only read them one chapter per day, so I can soak in the information). The first thing the book tells me is that you should forget about being a “perfect” parent. Instead, work on being “pretty good” or “good enough.” The term that they use that spoke most to my heart? Be a perfect parent for your child.

This chapter came with three things to always remember: 1) Remind yourself that you’re only human. Let go of mistakes and missed opportunities. 2) Recognize things that you can’t control. Go with the flow. 3) Remember the big picture. You’re not in this alone, and believe in grace.

You ARE a good parent, you just can’t base your judgment off what others think. You can’t use someone else’s ruler to measure your worth as a parent. So stop doing it.

Why does this speak to me so much? I don’t think these words would have stopped me so completely this morning, had it not been for our youngest son – you all know him as George on this blog.

Before George was born, we knew that he was trouble. At 13 weeks pregnant, I became very, very sick and ended up having an emergency gall bladder removal. The risk of the surgery to his survival was pretty high, but the risk of leaving it in was high as well. We moved forward, and he showed a great amount of resilience. My right kidney gave me all sorts of trouble, and we finally got to the answer during the final weeks of my last pregnancy. I have a twist in the tube that goes from my kidney to my bladder, and pregnancy would close off that twist…blocking my kidney and causing lots of pain. Stents were painful as well, so I tried my best to make it as far as I could.

In the last few weeks of my pregnancy with George, we did an amniocentesis to see if we could deliver early. At 37 weeks, it shouldn’t have been much of a problem, but my doctor wanted to make sure. It was a good thing she did, because even at that stage in my pregnancy, his lungs were very immature. We waited until 39 weeks to the day, then delivered by repeat c-section. (I had one regular delivery and three c-sections.)

He had a few hours of trouble with breathing, but nothing major. I spent a few extra days in the hospital because of problems with my cesarean. George and I left the hospital with a clean bill of health.

But that bubble didn’t last long.

Late-onset jaundice, troubles gaining weight, something that seemed like colic, but not…finally I gave in and went to the doctor, but our regular doctor wasn’t in. Blood work, lab tests. We left the clinic with promises of phone calls with answers. The clinic is an hour from our farm, so I took advantage of the time to get a few groceries and other items not available in our small community. 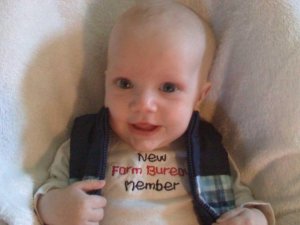 Something told me to check our home voicemail. We received a message from the doctor himself, asking for me to return his call ASAP. (I don’t know why they didn’t use the cell phone number I gave them.) I did, and received the news that we needed to get to the hospital. We were being admitted.

What was wrong? It seemed like everything. Nothing made sense. Off-the-charts liver enzymes, critically low blood sugar, etc. There were more lab tests with flags than normal. And we didn’t have a clue what was going on…he was three months old.

Who can deny this determination? Meet all of your challenges head-on.

That began a whirl-wind of appointments, specialists and 18-months not knowing what was going on. I pushed and pushed…knowing somewhere there would be an answer. Failure-to-thrive is a symptom, not a diagnosis.

Finally, the fourth physician that was involved at Mayo (or maybe sixth? seventh? I lose track.) came up with a long-shot. Ornithine transcarbamylase deficiency. (You can check out the OTC tab on top) Yes, spell check, I know that’s spelled right. I’ve had to spell it many, many times.

Low-protein diet, tons of doctor’s visits, extreme caution with illnesses…it’s been a crazy ride. Imagine, a rancher’s son living the life of a vegan – yet stricter. But the payoff? Weight. Curiosity. Growth. Imagination. My son.

We are beating odds and blowing away science. And we won’t quit pushing.

Trust in the Lord with all your heart, and do not rely on your own insight. In all your ways acknowledge Him, and He will make straight your paths.

18 thoughts on “Being a perfect parent”